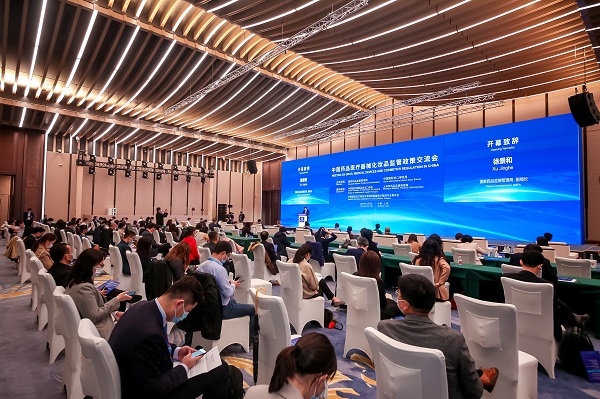 A meeting on the regulation of drugs, medical devices and cosmetics in China was held on Nov 6 in Shanghai during the fourth China International Import Expo (CIIE).

Xu Jinghe, deputy commissioner of the NMPA, and Ren Hongbin, vice-minister of commerce, attended and spoke at the meeting.

There were over 150 attendees, including delegates from the NMPA, the Ministry of Commerce, the National Healthcare Security Administration, provincial-level medical products administrations, and pharmaceutical, medical device and cosmetic enterprises from home and abroad, as well as media representatives.

Xu stressed that many enterprises in the highly globalized industries of drugs, medical devices and cosmetics have industrial chains and value chains all over the world. In the new era and new development stage, realizing high-quality development of drugs, medical devices and cosmetics will surely provide more opportunities for a large number of international enterprises to enter China's vast market.

Since its establishment, the NMPA has adhered to a people-centered development philosophy, upheld its mission of protecting and promoting public health, continued to deepen the reform of review and approval systems, comprehensively strengthened the full life cycle quality supervision of drugs, vigorously enhanced the construction of professional inspection teams and further promoted the modernization of drug regulatory systems and capabilities. Currently, various measures are underway to push forward reform in an orderly and effective manner, and significant results have been achieved.

He said that at present, drug regulators at all levels are earnestly implementing the Implementing Opinions of the General Office of the State Council on Comprehensively Strengthening the Capacity Building of Drug Supervision. In the future, the NMPA will continue to intensify its regulatory system and capacity building in such areas as fulfilling regulatory missions, improving legislation, promoting regulatory systems, innovating regulatory methods, strengthening professional team construction and enhancing international exchanges. Working together with related departments, the NMPA will make new and greater contributions to the building of a community with a shared future for mankind and to the protection and promotion of human health.

As one of the supporting activities of the fourth CIIE, the meeting expounded on China's policies on accelerating drug priority review and approval, self-inspection management requirements of medical device registration as well as cosmetics regulation. It briefed the progress in scientific and international drug regulation and negotiations on drug catalog access, enabling domestic and overseas enterprises to better understand China's market and regulatory orientations.